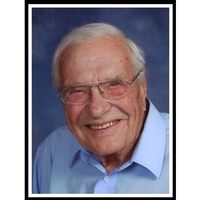 Wendell Arthur Hubing, age 91, passed away on January 28, 2018, at Three Oaks Health Service, Marshfield, Wisconsin.   Wendell was born on August 4, 1926, Neillsville, WI on the family farm to Arthur and Lucile (Davis) Hubing. Throughout his childhood he farmed with his family in the Pleasant Ridge area. When Wendell was seventeen, he enlisted in the US Navy during WWII and served on the LST 902 from 1944 – 1947.   Wendell received his mechanical degree from Eau Claire Technical School. He married Elaine Bender in 1948.  During their marriage he was employed at the Pontiac garage in Neillsville and later moved to Milwaukee, WI and worked at Swensen’s Ford Garage.  In 1952, Wendell and his family moved back to Granton where he started his own business, Hubing’s Standard Service.  He served the Granton community as a trustworthy and dependable mechanic for 45 years.   Wendell found the love of his life and best friend, Carol (Foemmel). They were united in marriage in 1971 and resided in Granton. Throughout their marriage they shared many joyous adventures together.  They enjoyed piloting their private plane, flying to several destinations, including Montana where some of his aunts and uncles homesteaded.  Camping was also a favorite activity as they enjoyed family gatherings around the campfire on the Hubing Forty, Pray, WI.  Other interests included setting up and selling at weekend flea markets, taking the family roller skating, and in later years they enjoyed their winter home and the warm weather in Brownsville, Texas.       Wendell served as an active Rotarian from 1953 – 2017. Then, being honored in 2016, he received the Rotarian of the Year Award.  He was also a member of Zion Lutheran Church, Granton, WI, the VFW, and the United States LST 325 Association. A fond memory of his was the Never Forgotten Honor Flight to Washington, D.C. in the Fall of 2011. He received a grand homecoming with fanfare while his family greeted him with open arms.   He was a kind and loving husband, father and grandfather. He cherished his visits with his children, grandchildren and great grandchildren.   Wendell is survived by his wife, Carol, of Granton and his five children, Steve (Jeannie) Hubing, Katherine (Hubing) Hazelwood, Dan (Julia) Ure, Scott (Margaret) Schlinsog and Londa (Dennis) Kuehn; and grandchildren Becca (Andy) Jarzynski, Kate (Jeff) Peterson, Ryan Trzebiatowski, Katie (Chad) Will, Travis (Danielle) Jorgensen, Megan Noel, Missy (Lee) Hansen, Scott Jr. (Danielle) Schlinsog, Sam (Renee) Schlinsog, Linda (Ray) Reiff, Andrea (Adam) Knapp, Becky (Mel) Coleman, James (Lindsey) Strey, Troy (Chanarat) Kuehn, Craig (Devin) Kuehn, Liana (Jessup) Weichelt, Kendall (Heather) Kuehn; and many great grandchildren and great great grandchildren. He is also survived by his brother, Brad (Winnie) Hubing and sister Artice Babka.     He was preceded in death by his parents; daughter-in-law, Barb Hubing, son-in-law, Pete Hazelwood, brother-in-law, Larry Babka, sister-in-law, Maureen Hubing; and his very special Aunt, Lila (Davis) Hubing; and also his in-laws Alfred and Jessie (Mills) Foemmel.   Funeral services for Wendell will be held at 11:00 a.m. Saturday, February 3, 2018 at Zion Lutheran Church, W2880 Granton Road, Granton, WI  Visitation will be held from 10:00 a.m. until service time on Saturday.   The family requests that memorials may be given in Wendell’s honor to Granton School District Foundation, Inc. or Granton Food Pantry.
To order memorial trees or send flowers to the family in memory of Wendell Arthur Hubing, please visit our flower store.