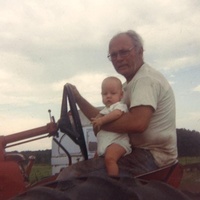 Wallace Edward Peterson was born on July 26, 1935 the son of Alvin and Odette (Clark) Peterson in Eau Claire, WI.  After his schooling in Fairchild, WI he joined the United States Air Force.  He served 20 years as an Airplane and Missle Mechanic while stationed in Iceland and the UK and many various locations.  Pete retired as a TSGT and he was awarded the Distinguished Service Medal.  He continued to serve in the Air Force Reserves after his retirement.

Pete will be remembered for his great sense of humor, his love of fishing, including Smelting in the spring and hunting, camping, boating, spoiling his grandkids and “wrenching” with his daughters.  He also loved to watch the Green Bay Packers and reading Westerns.

Preceding him in death are his parents, his wives, Sandra and Gail and brothers; Richard and Leonard.

To order memorial trees or send flowers to the family in memory of Wallace "Pete" Edward Peterson, please visit our flower store.