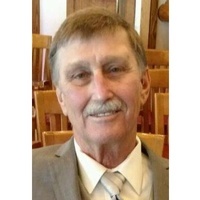 Tom Tibbett, age 65, of Neillsville, WI passed away Monday, January 1, 2018 at the Neillsville Care and Rehabilitation Center after a long battle with mesothelioma cancer.   Thomas James Tibbett was born on January 23, 1952 in Neillsville the son of Richard and Joanne (Pietenpol) Tibbett. He attended St. Mary’s Catholic Grade School and graduated from Neillsville High School in 1970. On August 14, 1971 he was united in marriage to Rosalie Koranda at St. Mary’s Catholic Church in Neillsville. After graduation, he worked for Nelson Muffler. Tom then attended Kenosha Technical College, where he received a degree in Horticulture. He worked for his father during his school years in the insulation and heating business. Tom also worked at various golf courses in Wisconsin; River's Edge, Neillsville Country Club, Hillcrest Country Club, Hallie Golf Course, and Bridgewood.   Tom was a member of St. Mary’s Catholic Church in Neillsville. He enjoyed golfing, caring for his garden of flowers and vegetables and his passion of sharing them. His motto was “Caring is Sharing”. He always threatened to make his garden bigger and better than the previous year. Tom was a very generous person and never thought of himself first, if you needed something he was always there to help. Tom also looked forward to deer season, when the boys, nephews, family and friends would be home. The camaraderie would bring out the endless deer stories, and the more brews they had the bigger the deer and stories were. Tom also enjoyed his time with his good friend, Rick Stenulson, landscaping and making firewood. Tom enjoyed his time working for Joel and Marla at BP, where he gained many new friends. After Tom’s diagnosis, he loved being able to take his dog, Lola, for a ride in the prowler around the block looking for deer.   He is survived by his wife, Rosie, two children, Jason (Josie) Tibbett of Neillsville, WI and Phillip (Tiffany) Tibbett of Augusta, WI, grandchildren, Chase and Rydge Tibbett, McKenna and Madilyn Davel, Braylon and Hudson Tibbett, his mother, JoAnn Tibbett of Neillsville, siblings, Margie (Gary) Zschernitz, John (Kathy) Tibbett, Jean (Jim) Smagacz, Linda (Bob) Carlton and Julie (Brad) Quicker, nieces and nephews, Travis Zschernitz, Jennifer Roenz, Melissa Illbeck, Amanda Smagacz, Bryan Smagacz, Justin Carlton, Jake Carlton, Josh Carlton, Hannah Quicker and Willy Quicker.   He was preceded in death by his father, Richard Tibbett.   A Memorial Mass of Christian Burial for Tom will be held at 10:30 a.m., Saturday, January, 6, 2018 at St. Mary’s Catholic Church in Neillsville. Rev. Varkey V. Joseph will officiate. Music will be provided by Vicente Cortez, organist, and St. Mary’s Choir. Visitation will be from 4:00 to 7:00 p.m., Friday at the Gesche Funeral Home and from 9:30 to 10:30 a.m., Saturday at the Church. Interment will be in the Dells Dam Cemetery at a later date.   Online Condolences may be made at www.geschefh.com. . The Gesche Funeral Home is assisting Tom’s family with Funeral arrangements.
To order memorial trees or send flowers to the family in memory of Thomas James Tibbett, please visit our flower store.