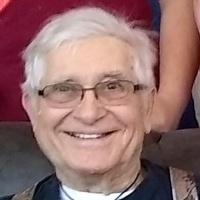 Stanley Pekol, age 83, of Neillsville, WI died Monday, April 2, 2018 at the Riverside Assisted Living Center in Neillsville.   Stanley Anthony Pekol was born on August 15, 1934 at home in Mead Township, Clark County, Wisconsin the son of Stanley and Johanna (Baskovec) Pekol. He attended Rocky Run Grade School and beginning in 1953 served in the National Guard. In 1956, Stan began working for Plautz Bros. operating heavy equipment. He worked there until 1964, when he went to work for the Nelson Muffler factory. Also in 1964, he was united in marriage to Sarah Lee Poertner in Willard, WI. They later divorced. Stan served in the National Guard until his discharge in 1982 and, after 32 years, he retired from Nelson in 1996.   Stan was a member of St. Mary’s Catholic Church in Neillsville. He was a long-time member of both the Clark County Male Chorus and the Kiwanis Club. Later in life he enjoyed volunteering at The HighGround. Stan served as a Storm Watcher, was a Ham radio operator and a member of the Amateur Radio Club. He enjoyed Polka music, playing the “Washtub Drum” and hunting.   He is survived by three children, Pamela J. (Charles) Durst, Michael A. (Dianna) Pekol and Christopher C. (Theresa) Pekol all of Neillsville, WI, eight grandchildren, Dani (Troy) Kopp, Katie (Craig) Lewis, Erik Pekol, Adam Pekol, Dalton Durst, Sawyer Durst, Jace Pekol and Cole Pekol, three great grandchildren, Jacob Kopp, Matthew Kopp and Reed Lewis, three siblings, James (Judy) Pekol of Wausau, WI, Judith (Richard) Jensen of Wausau, WI and Ernest (Lynette) Pekol of Clearwater, FL.   He was preceded in death by his parents, many Aunts and Uncles and a long-time, dear friend, Sally Kehoss.   The Mass of Christian Burial for Stanley will be held at 10:30 a.m., Friday, April 6, 2018 at St. Mary’s Catholic Church in Neillsville. The Celebrant will be Rev. Varkey V. Joseph. Music will be provided by Vicente Cortez, organist and St. Mary’s Choir. Military Honors will be performed by the Neillsville Veteran’s Council and the Wisconsin Military Honors Program at The HighGround. Burial will be in the Holy Family Catholic Cemetery in Willard, WI. Visitation will be from 4:00 to 7:00 p.m., Thursday at the Gesche Funeral Home in Neillsville and from 9:30 to 10:30 a.m., Friday at the Catholic Church.In lieu of flowers memorials may be given to The HighGround, P.O. Box 457, Neillsville, WI 54456   Online Condolences may be made at www.geschefh.com.   The Gesche Funeral Home is assisting Stanley’s family with Funeral Arrangements.
To order memorial trees or send flowers to the family in memory of Stanley Anthony Pekol, please visit our flower store.