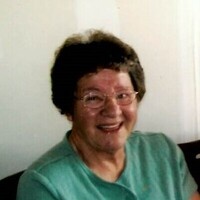 Shirley Marie Minsaas was born on July 8, 1934 in Niles, Michigan the daughter of Paul A. and Norma M. (Warnke) Minsaas. After graduating from high school, she worked in Chicago, IL for a short time as a housekeeper. She also worked at the Roddis Lumber and Veneer company in Marshfield, WI. On June 19, 1954, Shirley was united in marriage to Gordon C. Oldham in Greenwood. They lived in Kentucky while Gordon finished his military service and in 1955, they moved back to the Greenwood area and purchased a farm in the town of Eaton. Along with farming, Shirley also worked as a homemaker raising ten children.

She was a member of the Greenwood Lutheran Missouri Synod Church, and when that church closed, she became a member of St. John’s Evangelical Lutheran Church in Christie, WI. Shirley loved animals, especially her dogs and cows. When she wasn’t working, she enjoyed gardening, cooking and baking, sewing.

She was preceded in death by her parents, her husband Gordon in 2013 and her son, Bradley in 2017.

A private family memorial service will take place at a later date.

To order memorial trees or send flowers to the family in memory of Shirley Marie Oldham, please visit our flower store.