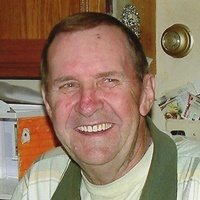 Ronald Lee Ziegler was born on July 23, 1939 in Neillsville WI the son of Marvin and Marion (Raine) Ziegler. He graduated from Neillsville High School and then worked at the Nelson Muffler Factory. Ron worked his way up the ladder at Nelson and eventually became the plant manager. He was united in marriage to Shirley R. Schultz on August 22, 1959 in Neillsville. Later, Ron and Shirley purchased the Montgomery Ward’s store in Neillsville, which they owned and operated for several years. After selling the store, they purchased a Rice Juice distributorship, which Ron operated until his heart transplant forced him to retire.

He was a charter member and a current member of the Neillsville Lion’s Club. He was a member

of the Neillsville Men’s Club and the Wilson-Heintz VFW Post #2241 in Neillsville.

Ron loved baseball and especially enjoyed this Milwaukee Brewer season. He enjoyed playing softball and managing softball for the Wildcat Inn tournament team back in the day. He was an avid deer hunter and enjoyed family and friends gathering during hunting season.

He was preceded in death by his wife, Shirley, a son, Mark and a daughter, Tammy.

To order memorial trees or send flowers to the family in memory of Ronald Lee Ziegler, please visit our flower store.