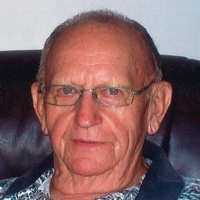 Robert E. Spiegel passed away peacefully at home on March 29, 2019.

Bob had a long, adventurous, and well-lived life with Florence (Knoop), his wife of 68 years. They were an amazing couple and were devoted to each other.

Bob was inquisitive, playful, and witty. He loved sitting around a campfire with family and friends, drinking Old Milwaukee, and telling jokes and stories.

Many family memories were made during camping and fishing trips.  He was an avid hunter and had 73 successful deer hunting seasons.

Bob spent many hours in his well-organized workshop. Besides building and fixing anything he put his mind to, he crafted and flew radio-controlled airplanes for many years.

He designed and built an A-frame cabin, without any electrical tools, including felling the logs.  Bob also bought a dragline and dredged a lake from a pond. All his homes were beautifully maintained and landscaped with his lawn mowed in perfectly straight lines. He loved to garden and made horseradish every year.

Bob and Florence traveled with Kenny and Jean Goetz as well as Gene and Leona Simmons throughout the U.S.  A memorable journey found them traveling on the unpaved AlCan Highway to and then through Alaska. They also camped at Marsh Miller Lake with Ern and Jane Kissling.

Bob was born in the town of Grant on September 16, 1931 to Alfred and Helga Spiegel.  He was the youngest of four brothers:  Edgar, Alf, and Bruce (surviving). He rode his horse to Cannonville School and trapped skunks for cash. He also worked as a hired hand for neighboring farmers.

He hauled milk starting at age 13 and continued working in the dairy industry including 11 years as a Curtis Candy Company Farms Certified Artificial Inseminator and as a DHIA Supervisor for 29 years.

Family and friends are invited to Bob’s Celebration of Life at Apple Valley Bar and Restaurant on Saturday, April 13 from 1 – 4 p.m.

To order memorial trees or send flowers to the family in memory of Robert Everett Spiegel, please visit our flower store.