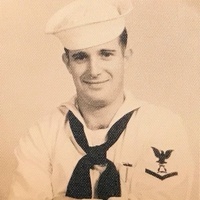 Richard N Dickerson set his sextant for a distant star to begin his new journey on November 12, 2020. Where he passed peacefully in his beloved home on the Black River.

Richard began his journey Feb 20, 1930, in Belle Plain, IA when he was born to Lonnie and Mildred (Keptner) Dickerson. He was born as the first boy into a family that would ultimately be nine brothers and sisters.  He joined the US Navy when he was 17 years old in 1947.  He was joined in marriage to Patricia (Kurbyun) Dickerson, in 1955.  He had three children, Neal Arthur Dickerson, Dale William Dickerson, and Susan Laura (Dickerson) Caacbay. Richard would serve in the US Navy and retired in 1967 where he gained the designation of a Veteran. He would chart a new course and worked in Civil Service till 1990. Richard and Patricia chose Neillsville as their home port due to their love of nature and the extended family that lived here.

After retirement Richard was a lifelong member of the VFW, and the American Legion, and the
Fleet Reserve Association. He marched in many parades locally and attended to the many of the requests set forth of those privileges and was very proud to do so. He loved fishing, old western movies, and happy hour.

Richard will be greatly missed and we hope to hold a celebration of life at the American Legion sometime in the Spring. We will place this information in the Clark County Press friends and family will all be invited.

To order memorial trees or send flowers to the family in memory of Richard Neil Dickerson, please visit our flower store.