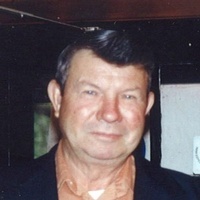 Raymond M. Wolfe, 89, of Granton, WI, died on Tuesday, September 26, 2017 at his home.   Raymond was born on September 12, 1928 in the Town of Easton, Marathon County, the son of Charles and Elizabeth (Ladd) Wolfe.  After completing 8th grade, he moved to the city of Wausau to live with his sister Irene and her husband Norman Kell, due to childhood asthma. He began delivering milk to homes in Wausau for Stieber Dairy and worked at a service station.  After several years, he returned to the family farm.  On June 14, 1947 he was united in marriage to Joan F. Kurth at St. Paul's Lutheran Church in Wausau, WI.  They purchased the Wolfe family farm and farmed there for many years while raising five children.  Ray did custom baling and combining for area farmers.  He also started a trucking business, that hauled can milk for Star and Easton Center cheese factories, and spread fertilizer and lime for FS Cooperative in Antigo.  He also did logging in the winter months. In 1960, he fell from a load of hay and broke his back.  Ray was then unable to continue his trucking business, so he obtained an insurance license and sold life, property and casualty insurance for five years.  He went back to farming and later Ray and Joan moved to Mercer where they raised potatoes, logged their properties and he worked on a rice & cranberry farm at Manitowish Waters, WI.  In 2005 they moved to Weston Township, Neillsville, WI to be closer to family.  After Joan's passing in 2015, Ray moved to Granton, WI.  Ray is a member of St. John's Lutheran Church in Christie, WI. He is survived by his children;  Mary Lou (Bruce) Klug of Merrill, WI, Donna Lindow, Chili, WI, Nancy (Gary)Hansen of Granton, WI, David Wolfe of Boulder Junction, WI and Lindy (Sherman) Roberts of Rhinelander, WI.  He is survived by twenty grandchildren and thirty-six great-grandchildren. Raymond was preceded in death by his wife Joan on June 15, 2015, his parents Charles and Elizabeth Wolfe, his father and mother-in-law, August and Josephine Kurth, brothers Herbert Wolfe and Russell Wolfe, sisters Laura Post and Irene Kell and his son-in-law Mike Lindow. Funeral services for Raymond will be held at 11:00 a.m., Saturday, September 30th at Zion Lutheran Church in the town of Easton, E7195 Star Road, Aniwa, WI, 54408.  Interment will be in the church cemetery.  Visitation will be held from 5:00 p.m. to 8:00 p.m., Friday, September 29, 2017 at the Gesche Funeral Home in Neillsville, WI and from 10:00 to 11:00 a.m., Saturday morning at the church. Casket bearers are: Mike Klug, John Klug, Tom Klug, Joe Klug, Kevin Lindow, Ryan Hansen, Chad Hansen, Tyler Wolfe, Logan Wolfe, Michael Wolfe, Ian Wolfe and Tom Gilbertson. Online Condolences may be made at www.geschefh.com.   The Gesche Funeral Home is assisting Raymond’s family with Funeral arrangements.
To order memorial trees or send flowers to the family in memory of Raymond Merlin Wolfe, please visit our flower store.