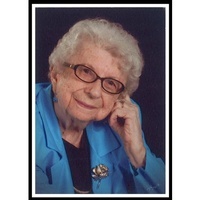 Mildred Lawson, age 96, of Neillsville, WI died Wednesday, January 10, 2018 at the Marshfield Medical Center.   Mildred Marie Shramek was born on April 27, 1921 in the Town of Levis, Clark County, Wisconsin the daughter of Charles and Mary (Karela) Shramek. She attended Shortville Grade School and graduated from Neillsville High School in 1939. After graduation, she worked as a county employee as a Clerk in the office of the Farm Security Administration for 3 ½ years. In December of 1942, she became a Clerk Typist as a government employee in the office at Richland Center, WI, and in 1943 as an office manager at the office in Black River Falls, WI. She resigned as office manager to be united in marriage to Arlo Wayne Lawson on February 9, 1946 in Neillsville. After their wedding, they operated a milk hauling business and purchased a farm in the town of Pine Valley. Just previous to them selling their farm in June of 1957, Mildred began working as a secretary at the Extension Office in Neillsville. On May 1, 1961 she was appointed to the position of Register of Probate for Clark County under the direction of Judge Lowell Schoengarth. All together she served under four judges. While serving as Register in Probate she also served as Deputy Clerk of Courts, Juvenile Court Clerk and Probate Registrar. Arlo became ill in October of 1982 and passed away on December 3, 1982. After 24 years of service Mildred retired on April 30, 1985.   Mildred was a member of the United Church of Christ. She served as the church’s assistant financial secretary, the sewing circle of which she served two years as their secretary, the Women’s Bazaar Group, Sunrise Circle and two years as a member of the Memorial Committee.   She is survived by a son, Richard, two grandsons, Mike (Robin) Lawson and Gregory Lawson, five grandchildren, Lauren, Jack, Charlie, Lucy and Victor, a sister, Dorothy Affholder, nieces, Sandra Harless, Kathy (Brian) Motl, Beverly (Ronald) Anderson and Bonnie West. She is also survived by several cousins, adopted families and special friends near and far, plus local friends.   She was preceded in death by her grandparents, Charles & Rosalind Shramek and Barbara Karela, her parents, Charles and Mary Shramek, her husband, Arlo Lawson, a nephew, Dennis West and a brother-in-law, Donald Affholder.   Funeral Services for Mildred will be held at 11:00 a.m., Monday, January 15, 2018 at the United Church of Christ in Neillsville. Pastor Jacoba Koppert will officiate. Music will be provided by Eileen Zank, organist. Interment will be in the Neillsville City Cemetery. Visitation will be from 9:30 to 11:00 a.m., Monday at the church.   Honorary Pallbearer will be: Mark Schneider   Pallbearers will be: Ernest Logemann, Owe Petersen, Richard, Kumm, Brian Motl, Howard Mathis and Sam Mathis.   Online Condolences may be made at www.geschefh.com.   The Gesche Funeral Home is assisting Mildred’s family with funeral arrangements.
To order memorial trees or send flowers to the family in memory of Mildred Marie Lawson, please visit our flower store.