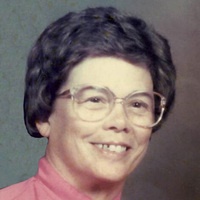 A livestream of Marjorie's funeral service can be seen at 11:00 a.m. Wednesday, April 7th by clicking on "read more" and scrolling to the bottom of her obituary.

Marjorie Doreen Short, 99, of Granton, WI died on April 1, 2021 at the House of the Dove in Marshfield. Marjorie Doreen Dempsey was born on November 20, 1921 in Barron, WI. She spent her childhood on the family farm in nearby Hillsdale with her parents Raleigh and Daisy (Matthews) Dempsey and four brothers. Her early years spanned the post-WWI and Depression years and times were often lean. The children, like most “farm kids,” were asked to pitch in on the chores. They learned the value of hard work and the rewards of teamwork, lessons that Marjorie embodied throughout her entire life.

When she was only four, she repeatedly followed her older brothers “down the hill” to the neighborhood one-room school until her parents and teacher agreed to let her stay. This began her life-long love of education, especially reading.  Graduating from Barron High at 16, Margie then enrolled in the teaching program at the University at River Falls where she earned a B.A. in education at age 18. She then accepted a teaching position at Merrillan High, which she enjoyed until her next adventure began.

Early in 1946, Margie agreed to go on a blind date with fellow teacher Jeanette Ehlers and her boyfriend Bob Braatz, both from the Neillsville-Granton area. Bobby brought along his friend Dale Short. Both men were recently returned WWII veterans. Dale and Margie were a great match and married that Oct. Dale brought his bride home to Pleasant Ridge, Town of Grant, to join him at the farm of his parents, Eugene and Leah Short. Within a year, the couple moved to their own farm just across the road.

When they met, Dale was engaged in farming with his father and brothers. They were milking cows and raising fox and mink. Upon her marriage, Margie worked on the farm and became an integral part of the mink ranch and every portion of their farm life. The fur endeavor became Short’s Fur Farm, a successful 70-year agribusiness.

In 1947, the couple became parents to their son Wayne. He was joined by a sister, Lorraine, in 1949. Both Margie and Dale were strongly supportive of all their children’s interests and activities, driving countless trips to 4-H, baseball, the lake for water skiing and Bruce Mound for skiing.

Margie also enthusiastically supported Dale’s love of flying, often acting as navigator with maps spread across her lap in the cockpit. As members of the International Flying Farmers, the entire family enjoyed making friendships at fly-ins and conventions both in the States and Canada. For many years, Margie was the newsletter editor for the Wisconsin chapter.

Margie bowled for over 40 years on the Urban Motors team in the ladies league and joined Dale for several years on a couples league. They also traveled extensively by car, private plane piloted by Dale or Wayne, and in their RV. They often spent a couple winter months visiting Lorraine in South Texas and attending reunions of Dale’s squad in the Army Air Corps. Most of the members had returned to live in Texas where they had attended bombardier training. Margie always said the wives helped the former airmen win the war yet again.

In later years, Margie enjoyed her membership in the Ladies Auxiliary of American Legion Post 73 and could be seen behind the buffet line, serving food and visiting with friends old and new.

Dale and Margie lived on their farm for all of their 61-yr marriage. Margie worked on the fur farm well into her 70s. By then ownership and operations were being carried on by Wayne and his wife Bonnie.

After Dale’s death in 2007, Margie remained at home until mid-2015. She then moved to the Neillsville Retirement Community, Neillsville Care and Rehab, and finally the House of the Dove in Marshfield.

Marjorie is survived by 2 children, Wayne (Bonnie) Short of Granton, daughter Lorraine Short and partner Paul Smith of Bayside, Texas: granddaughter Stephanie (Larry) Swenor and great granddaughters Sydney and Kamryn Swenor, all of Mukwonago, WI. She is also survived by numerous nieces and nephews in the Dempsey and Short families. During her children’s high school years, the family grew to include a foreign exchange student Yvonne (Brunner) Schuler who married Hans and had children Sergio, Evelyn and Vivi. They reside in Brazil and their native Switzerland.

Margie was preceded in death by her husband Dale, her parents, her brothers and their wives Robert and Frances, Albert and Wilma, Allen and Jo, Clarence (as a toddler), and James and Francis Dempsey; brothers-in-law  and their wives Glen and Coletta and Floyd and Joan, and sister-in-law Jeannette (Short) Gaier.

Marjorie’s funeral service is at 11 a.m. on Wed, April 7, at Gesche Funeral Home. Visitation begins at 10. Burial will follow in the Town of Grant cemetery on Pleasant Ridge alongside her beloved Dale and overlooking their longtime home.

Margie will be greatly missed by her family and countless friends both near and far.

To order memorial trees or send flowers to the family in memory of Marjorie Doreen Short, please visit our flower store.