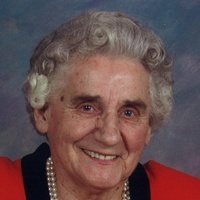 Marie Kubat-Lynch’s life started when the Kubat Family sailed to America from Czechoslovia moving permanently in the Neillsville area.  Marie’s parents farmed until her father was gorged by a bull and was killed.  The family then moved into town.  Marie’s mother was 33 yrs old when she had her and she was her first child. Marie’s mother re-married and she gained a sister.

Marie lived her life in service, praise, and glory to our Lord.  Her church family was at St. Mary’s in Neillsville, where she used to her talents to teach CCD for many years.

Marie was a homemaker and lifelong resident of Neillsville with many strong ties to the community.  Her strong faith was a lifelong guide that was a beacon that carried her through the good times, as well as the bad times.  Her strong will and quick wit and keen sense of humor will be missed by all who were fortunate enough to be in her company.

The family thanks everyone for their kind thoughts and prayers.

To order memorial trees or send flowers to the family in memory of Marie Jeanette Lynch, please visit our flower store.