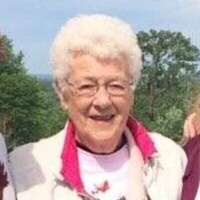 Laura Emma Nowack was born on October 8, 1933 in Granton, WI the daughter of Raymond and Ardina (Helm) Nowack. She graduated from Granton High School. On July 11, 1953 she was united in marriage to Ralph Riedel in Portsmouth, VA. They lived in Virginia for a short time after they were married and then moved to Granton where she worked as a homemaker raising their family and farming with her husband. Laura loved being a mother and always put her children before herself. In addition to being a full-time mother, she also worked as a teacher’s aide at Granton School and part-time at Harry’s Hardware in Granton.

Laura was a member of Zion Evangelical Lutheran Church in Granton. In her spare time, she enjoyed crocheting and sewing, and she cherished the time spent with her family. Her greatest joy in life was being near her children, grandchildren and great grandchildren.

She was preceded in death by her husband, Ralph in 1990, a son, Ricky in 1977, her parents, Raymond and Ardina Nowack and a brother-in-law, Raymond Barth.

A private family funeral will be held at a later date.

To order memorial trees or send flowers to the family in memory of Laura Emma Riedel, please visit our flower store.