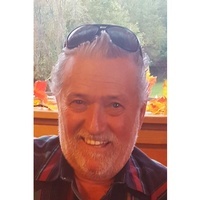 Larry Erickson, age 69, of Merrillan, WI died on Sunday, December 31, 2017 at the Valley Baptist Medical Center in Texas.   Visitation will be held from 4:00 to 7:00 p.m., Friday, January 12, 2018 at the Gesche Funeral Home and from 10:00 to 11:00 a.m., Saturday, January 13th at the Church.   A Memorial Service will be held at the United Church of Christ on Saturday, January 13, 2018 at 11:00 a.m. Pastor Jacoba Koppert will officiate. Interment will be in the Neillsville City Cemetery with Military Honors performed by the Neillsville Veteran’s Council.   Serving as pallbearers will be his brothers, Dennis Erickson, Gary Erickson, James Erickson, Kevin Erickson, grandson, Andy Andrews and life-time friend, Steve Humphry.   Honorary pallbearers will be his granddaughters, Kelly Andrews, Alina and Adilyn Schneider and a future granddaughter to be born in April 2018.   Larry Lee Erickson was born on April 1, 1948, in Neillsville, WI the son of James and Janet (Rosandich) Erickson. He attended school in Marshfield, WI and served in the Wisconsin National Guard from January 8, 1966 to January 7, 1972. He was united in marriage to Sandy Schecklman in 1972. They farmed in Nasonville, WI until the early 1980’s. Larry and Sandy were later divorced. Faithful to his work within the Carpenter’s Union, Larry moved to many other places including Texas, Arizona, California, Las Vegas and Mexico, where he was united in marriage on February 2, 1990 to Sandra Cardenas and divorced thereafter. Later in life, avoiding the cold weather, Larry chose to spend the winter months in Weslaco, TX with his dear friend, Bonnie Olson, returning to Merrillan to work steadily for Black River Coop the remainder of the year.   In his younger years, Larry enjoyed playing baseball, tapping the heal of his cowboy boot to the beat of country music, and taking long rides on his motorcycle. Larry Erickson was a true people person engaging all he met as he drove truck across the country for many years. Some might call his work his passion never missing a day, always at the wheel of his truck, with a sweet tea by his side, never to be confused with coffee. You might otherwise find Larry cleaning and caring for his cherry red thunderbird, one of the many he had accumulated over the years.   He is survived by his children, Jennifer (Chris) Dehn of Baraboo, WI, Anna (Andrew) Schneider of Las Vegas, NV, grandchildren, Andy & Kelly Andrews, Alina & Adily Schneider, along with another granddaughter arriving in April 2018, step grandchildren, Maranda, Mariah, Jacob Dehn, one great-grandchild Nattalie Blau of Baraboo and a close friend, Bonnie Olson.   Larry is also survived by siblings, Dennis (Ruth) Erickson of Spencer, WI, Gary (Donna) Erickson, James (Agnes) Erickson, Kevin (Jenny) Erickson, Linda (Jose) Rodriguez, Karen (Ralph) Weber all of Neillsville, WI, Sandy (Cheryl) Erickson of Wausau, WI, many nieces, nephews and cousins.   He was preceded in death by his sister, Connie Erickson, his father, James Erickson and his mother, Janet Meier.   Online Condolences may be made at www.geschefh.com.   The Gesche Funeral Home is assisting Larry’s family with Funeral arrangements.
To order memorial trees or send flowers to the family in memory of Larry Lee Erickson, please visit our flower store.