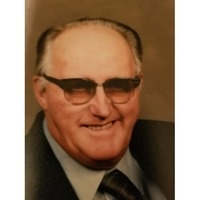 Jesse was born on February 19, 1931 at St. Joseph’s Hospital in Marshfield the son of Jesse William and Agnes (Schwieger) Richmond. His mother passed away one day later and he was raised by his step mother Edna Cassidy Richmond Akins. He attended school in Greenwood and graduated from Neillsville High School in 1950. After graduating, Jesse took the farming short course in Madison, WI. He was united in marriage to the love of his life, Virginia Vandeberg on June 23, 1951 at the United Methodist Church in Christie, WI. They farmed in Christie for four years before moving to Fairchild, where they farmed for a year. They then moved to Granton and farmed for many years in the town of Grant. While farming, Jesse also sold silos and farm equipment. After their children where raised, Jesse and Virginia retired from farming, sold the farm and moved to their new house on five acres nearby. Jesse did not totally retire though; he became a field rep. for Arpin Dairy for a few more years before retiring for good.

Jesse is a long-time member of the United Methodist Church in Granton. He loved sports of all kinds and especially enjoyed watching the Milwaukee Braves/Brewers and the Green Bay Packers of which he was a co-owner. He also had a passion for Oliver tractors and steam trains. Jesse’s family always came first, though. He loved his family very much and adored all the children in his life including the 16 foster children of which three they adopted. In 2018, they were honored at the Granton Fall Festival as the Honored Grandparents by the Granton FFA Alumni.

He was preceded in death by two children, Marvin Eugene Richmond and Dennis James Richmond, and a brother, Donald Richmond.

Jesse’s family will greet visitors from 4:00 to 7:00 p.m., Thursday, June 25, 2020 at Gesche Funeral Home and Cremation Service, Neillsville, WI. The funeral service will be private, immediate family only. Interment will be in the York Center Cemetery in the Town of York.

To order memorial trees or send flowers to the family in memory of Jesse Richmond, please visit our flower store.