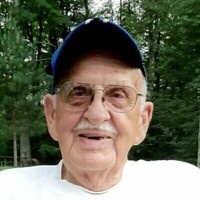 Jesse Marty, age 90, of Neillsville, WI passed away peacefully at home on Saturday, April 18, 2020 with family by his side.

Jesse Ray Marty was born on July 13, 1929 in Neillsville, WI the son of Casper and Emma (Altemus) Marty. He attended school in Neillsville and then started farming with his father. Along with farming, he also filled in on milk routes as needed. On October 4, 1951 he was united in marriage to Catherine Hainzlsperger in Dubuque, IA. He went to work as a Mason Tender/Mud Mixer for L.G. Arnold Construction Company in Eau Claire, WI. While working for them, Jesse, had a hand in building the Memorial Medical Center in Neillsville and the current Neillsville High School. He also worked for the H.F. Radant Construction Co. in Eau Claire, doing sewer and water. Jesse would later work for the Nelson Muffler factory in Neillsville for many years.

When not working, Jesse, had a passion for buying and selling tractors. He would buy one, fix it up and then sell it. All told he probably owned and repaired over 300 tractors in his lifetime. He enjoyed going to auctions and flea markets and stayed active by going to the woods and making firewood of which he was still doing at 90 years old.

As much as he enjoyed his hobbies, Jesse, loved his family and friends that much more. He loved the times spent together at family functions and rarely missed a breakfast and supper “clutch” with his friends. He was a loving, hard-working husband, father, grandfather, great grandfather, brother and friend who will be dearly missed by all who knew him.

Jesse’s wishes were that people would remember him the way he was, thus there will be no services.

To order memorial trees or send flowers to the family in memory of Jesse Ray Marty, please visit our flower store.