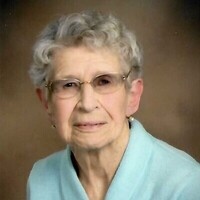 A livestream of the Mass of Christian Burial for Jean can be viewed at the bottom of this obituary starting at 10:30 a.m., Tuesday, March 29, 2022.

She married Ernest Kuhn on June 21, 1944, at St. Mary’s Catholic Church in Neillsville.  After their marriage, she moved to Ernie’s family farm in the Town of Washburn, where she worked alongside her husband and his family farming. She also assisted Ernie in his seed/farm supply business for many years. They had two sons, Paul M Kuhn and Richard E Kuhn.

Jean was an active member of St. Mary’s Catholic Church, being involved with the Bereavement Ministry, the Parish Prayer Chain, and in the St Cecilia Circle of the St Mary’s PCCW for many years. She was involved in different Bible Studies.  Jean was very active for many years in the Washburn Homemakers Club. She also volunteered at the Neillsville Jail Museum for many years.

Jean is survived by one son Richard (Donna) Kuhn of Neillsville, a brother John (Darlene) Trogner of Oregon, WI, and a daughter-in-law, Kathleen Kuhn of Wisconsin Rapids.

Jean was preceded in death by her parents John and Edith Trogner, her husband Ernest, son Paul Kuhn, sister Betty Trunkel, and her husband’s sister and brother-in-law Louise (Kuhn) Muglach and Maurice Muglach.

Visitation will be at St. Mary’s Catholic Church in Neillsville, from 9:00 AM until 10:15 AM on Tuesday, March 29, 2022.  A Mass of Christian Burial will follow at 10:30. Rev. Fr. Nathaniel Kuhn will be the celebrant with Rev. Fr. Greg Michaud concelebrating.  Burial will follow at the Neillsville Cemetery. A livestream of the Mass of Christian Burial for Jean can be viewed at www.geschefh.com beginning at 10:30 a.m. Tuesday, March 29th.

To order memorial trees or send flowers to the family in memory of Jean Agnes Kuhn, please visit our flower store.