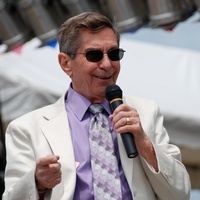 Howie Sturtz was born on July 5, 1930, to parents Howard A. Sturtz, Sr. and Cassie (Gray) Sturtz.   Young Howie showed great promise as a musician and joined the Loyal High School Senior band as a 7th grader, winning awards at local, district, and State competitions. In 1944, at the age of 14, Howie was hired to play trumpet with the Art Lucht Dance Band, and two years later assembled his own small orchestra. The Howie Sturtz Orchestra would eventually play thousands of dance jobs; perform hundreds of live TV shows; and record many albums.  Entertaining was in Howie’s blood, evidenced by the fact that he “retired” many times over the span of his 70-year musical career.   Howie, forever the entrepreneur, graduated from Loyal High School in 1948, and opened a camera and music store in Loyal, WI.  In 1950, Howie began employment with WDLB Radio in Marshfield, WI, and in September 1950 married his high school sweetheart, Dorothy Hannan. The couple moved to Neillsville where Howie accepted the position of branch manager for WDLB’s Neillsville Studio.  In 1951 the Sturtz Family “began to grow.”  Howie is survived by his wife Dorothy and by six children: Rick Sturtz (Toni); Sherri Kliczak (John); Susan Reusser (Steve); Candy Karlen; Judi Kusha (Sia); and Howard “Skip” Sturtz (Tammy). He is also survived by (13) grandchildren and (17) great grandchildren.  Howie was pre-deceased by siblings Herbert Sturtz, Carol (Hagen), Bernadine (Miller) and Donald (Sturtz). In 1957, Howie was awarded a permit to build his own radio station (WCCN) in Neillsville, WI.  Over time, WCCN AM expanded to include FM radio, and in 1965, at the conclusion of the 1964 World’s fair, Howie, along with Sales Manager Wayne Grap, purchased the Wisconsin Pavilion of the New York World’s Fair. The reconstructed pavilion housed the new studios for WCCN AM-FM and has, under the ownership of Kevin and Peggy Grap, endured to the present as a highly successful radio station and widely acclaimed tourist attraction.   And while Howie had a passion for radio and music; he also loved and flew airplanes; acquired and drove many classic cars; and always dressed “smartly.” He forever had a pen in hand, and no place his family or orchestra ever dined was left without a napkin adorned with a drawing of a classic car, Betty Boop or Mickey Mouse; Howie could draw a “better Mickey than Disney!” Howie accomplished many “things,” but enlivening the spirits of others is what kept the glimmer alive in his own eye. He measured accomplishments by the happiness they brought to others and by the resources he could enlist on behalf of many charitable causes.  The trumpet was his instrument of choice, but it was his creative vision, his wit, his compassion, and his tireless search for a laugh or smile that helped so many. He was a good judge of talent, and he had the wisdom to surround himself in business and in his orchestra with people of varied talents equal to his own. Howie’s wife Dorothy was a partner in all of “his” achievements; they were a Team.  As a broadcaster and bandleader, Howie used his celebrity on behalf of the American Cancer Society, helping the Clark County Chapter to be first “over goal” during every year of his chairmanship; he worked on behalf of the March of Dimes, the Shriners, and the Children’s Miracle Network (to name a few) . . . to fundraise and educate a public about the importance of reaching out to those in need.   Howie was without equal as a supporter and promoter of his community, championing the dairy industry, especially his valued sponsor, Grassland Butter, throughout the long history of his radio and orchestra careers. Howie could always be “counted upon” to be his “own worst critic,” but he was also boundless in his willingness to promote the needs of others.  At the age of 87, just a few months ago, Howie and his orchestra “mates” delighted a large audience with a concert to raise funds for the local chapter of the Alzheimer’s Association.   Howie loved his family . . . his many grandchildren . . . and his wife Dorothy, for whom he provided an abundance of loving care and patience, especially as Dorothy has faced health challenges during the past two years.   The family wishes to acknowledge the immense love, guidance, and professional assistance of the staff at The Classic at Hillcrest Greens assisted living in Altoona; the staff of Heartland Hospice in Eau Claire; and the care providers of Visiting Angels Home Care in Eau Claire.  We are humbled by the selfless care and loving concern that blessed our family, from EACH of these partners, during this challenging time.   Howie Sturtz, with all family present, passed peacefully in his home on February 16, 2018. A private funeral mass will be held for immediate family.   Memorials may be made to . . . Loyal Food Pantry; 228 N. Main St.; P.O. Box 50; Loyal, WI, 54446 Neillsville Food Pantry; 140 W 5th St; Neillsville, WI, 54456 Ronald McDonald House; 803 W. North St.; Marshfield, WI, 54449   Online Condolences may be made at www.geschefh.com.   The Gesche Funeral Home is assisting Howie’s family.
To order memorial trees or send flowers to the family in memory of Howard Sturtz II, please visit our flower store.