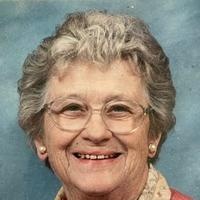 Helen was born on May 20, 1926 in Madison, Wisconsin to Lee E Olson and Louise Olson (Bullard) both of whom preceded her in death.

The family settled in Mankato, Minnesota in the early 1930’s.  She attended grade school and high school in Mankato and then attended the University of Minnesota majoring in business and was a member of the Alpha Chi Omega sorority.  She was very active young lady for her time enjoying biking, swimming, tennis and golf.  She had two younger brothers, Don Olson of Bloomington Mn and later Fort Myers, Fl and Larry E Olson of Mankato, MN and later Stuart, Fl, both of whom preceded her in death.  Both brothers fondly looked up to “sis”.

After attending the U of M, she traveled to Los Angeles, California for a year but then returned to Mankato where she met John H Knoff in 1947 and later married in 1948.  They settled in Eau Claire, Wisconsin where they raised their 5 children, Bill Knoff of Ft Myers, Fl; Jim Knoff of Oshkosh, Wi; Julie Ruka of Hales Corners, Wi; Chris Knoff of Chili, Wi and David Knoff of Las Vegas, Nv.  She had 7 grandchildren, Adam, Eric, Paul, Donald, Danielle, Kristen and Lauren. She also had 4 great grandchildren, Colin, Andrew, Liam and Cashton.

In 1960, the family moved to Neillsville, Wi where all 5 children graduated from high school.  John became employed by Taylor Publishing and LG Balfour Co. selling yearbooks and class rings to high schools and colleges in northern Wisconsin and northern Michigan.  Because of the travel required for his job, Helen stayed at home to raise the 5 children.  In her rare spare time, she was an avid golfer, winning the club championship, and she also enjoyed playing bridge and playing the piano and teaching lessons on the piano.

When all of the children had graduated from high school, Helen took a job as a social worker for the county which she held for over 15 years.  In 1992, John and Helen sold their house in Neillsville and bought a home in the Villages, Fl where they enjoyed the Florida lifestyle until John’s death in 2002.

Never one to sit around and sulk, after John’s death, Helen kept playing golf and bridge when one day in 2003, she met Vince Mole’ on the golf course.  He asked her to join his golf group the following week and they became great friends and eventually married in 2009. They enjoyed traveling, golf, shopping, dancing in the square among other things.  They truly adored each other.

In 2012, due to declining health, Helen was admitted to an assisted living facility where she spent her last 8 years.  Vince would visit her every day and bring her flowers, sing to her, take her for walks.  Helen succumbed to the battle with alzheimers disease and other physical ailments on December 30, 2019.

Services are pending and final interment will be in the Florida National Cemetary in Bushnell, Fl at a later date.

To order memorial trees or send flowers to the family in memory of Helen Louise Knoff Mole', please visit our flower store.