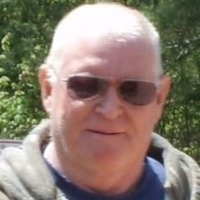 George Geisler, Jr passed away peacefully at his home on Sunday, June 6, 2021 surrounded by his family.  George was born on July 27, 1944 in Stanley, Wisconsin to George Francis and Naomie Lucille (Cook) Geisler.  George married Susan Katherine Yurgevich on September 4, 1970 in Chicago, IL.  George and Susan moved to Merrillan, Wisconsin in 1972 and have resided there since that time.  The couple celebrated their 50th wedding anniversary in 2020.

George served in the US Army and was a Vietnam Era veteran.  He served as an Armor and belonged to the 171st INF BDE and 559th Engineer Company as a SGT (E5) and was honorably discharged on August 3, 1967.

George worked for Neumann Construction for several years painting water towers.  He always had an adventurous story to tell about those years while working on the road across the United States.  He spent the remainder of his career driving truck for Glenn Mack trucking for well over 20 years.  George served on the Village of Merrillan Board and also as Fire Chief for a time.

George had several hobbies over the years including raising peacocks and pheasants in his game farm along with hunting and taxidermy work.  George enjoyed playing golf and especially enjoyed teaching his grandson Brett to golf at the early age of 5 on the Osseo golf course.  George also enjoyed spending time outdoors four-wheel trail riding with friends and family on many adventure filled trips.  George enjoyed feeding his squirrels and birds along with being an avid gardener.  George always had time for a beer at the Corner Bar or on his front deck spending time with friends and family.

The Geisler family would like to thank Black River Hospice, Merrillan First Responders, Jean Comstock, Amanda Strandberg, Jeff Casper, and Tamie and Ronnie Matalas for assisting in taking care of George for the past several months.

A Celebration of Life for George will be scheduled for a later date.

To order memorial trees or send flowers to the family in memory of George Geisler Jr., please visit our flower store.