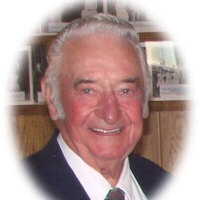 A livestream of the Funeral Service for Fred can be viewed at the bottom of this obituary starting at 11:00 a.m., Friday, February 11, 2022.

Frederick was born February 26, 1936, to Frederick and Lucille Grap at their resident located at Globe, northwest of Neillsville. He received his education in the Globe County school and Neillsville High School. Fred helped his parents on the family farm until he volunteered for the draft into the US Army in 1954 and received honorable discharge in 1956. He was stationed for nine months overseas at Hawaii and at that time it was not a state or commercialized. When returning back home later that year, he married Mildred Sladek on September 26, 1956, which was her parents 25th wedding anniversary. Fred helped his parents farm, hauled canned milk, and drove semi for some time. They moved to Random Lake where Fred worked for a canning company in the fields and ran various equipment. They moved back to Neillsville when they purchased a farm in 1962 at Globe and raised their children there. When returning, the family joined St John's church in Neillsville and his children attended school there until High School. Pastor Weber and Fred started the service videotaping on TV and Fred continued 20 years until returning to Globe Immanuel as members in 2009. While farming Fred upgraded his herd and built an addition onto the barn, cutting his own logs for lumber and neighbors help build. Fred and wife bought land from several neighbors who quit farming. Fred had served on the Weston town board for three years, on Clark Electric board for three years and on the Farmers Union board nine years. After 28 years farming Fred had a tractor accident and farmer’s lung which forced them to sell the farm and moved to a hobby farm which they owned a mile south, on County Road G. One and a half years later they had a house fire due to a faulty electric wire leading from the furnace. Their son, Perry built them a new house in ten weeks during winter and they moved in on Jan. 17, 1991. Perry was an architect and handled sales for ABC Arrow Building and a stockholder there at Spooner, WI.

After recovering and able to work again Frederick and wife worked in Cottonwood, AZ. for Pastor Schlicht managing the maintenance at his assisted living Lutheran Home. Following a couple of years, they returned, and Frederick worked for Clark County Forest and Parks and become manager with his wife, of Russell Park in Hatfield from 1991 to 1996. He and wife handled all duties to be done at the park of over 200 sites. During the winter months they managed Bruce Mound café, cooking, and serving. Fred than worked for Ruzic Construction for several years and helped in fields for the owner of their former farm until a semi rear-ended him on a tractor and then he retired to his hobby farming. The impact caused him to have intestine blockages and many surgeries. Fred had constant visits to the doctors with also replacements and loss of muscles that weaken him slowly.

Many know" farmer" Fred as growing sweet corn for many years, selling roadside, and making maple syrup every year. His hobbies included raising potatoes, onions, pumpkins, and other veggies and giving much to the neighborhood and the Globe church and St. John's school in town. Also selling at the farmer’s market. During the winter months he built log bank houses (with small branches) for each of the great granddaughters and log (carved out middle of 6" branches)18-wheel semi banks for the great grandsons, with their names and birth engaged on the bottom of each. Many bird feeders were given to the grandchildren, and he built bird houses, plus 4-wheeler carriers, several 2- wheel trailers and had many talents to work on in his shop. Hunting was special with family around to hunt here, dress and finish up deer season making sausages together. Fishing was fun with many years of a Canada fishing trip with family and meeting their Canada friends each year. Fred and wife also spent a couple of weeks in AZ and Texas during winter a few years. Three cruises were enjoyed, a week in England and a vacation in Hawaii for their 30th anniversary. Sundays were spent going to church and after that still dancing until the COVID closed many businesses in 2020. They celebrated their 25th, 55 and 60™' wedding anniversaries with dinner and dances for relatives and friends.

Funeral Services for Fred will be held at 11:00 a.m., Friday, February 11, 2022, at the Immanuel Evangelical Lutheran Church in Globe, WI. Pastor Nathan Wilke will officiate. Music will be provided by Kim Schwark and Kristal Donahue, vocalists and Karen Hoppa, organist. Interment will be in the Neillsville City Cemetery with military honors performed by the Neillsville Veteran’s Council. Visitation will be from 4:00 to 7:00 p.m., Thursday at the Gesche Funeral Home and from 10:00 to 11:00 a.m., Friday at the Immanuel Lutheran Church. A livestream of Fred’s funeral can be seen at www.geschefh.com beginning at 11:00 a.m. Friday, February 11th.

To order memorial trees or send flowers to the family in memory of Frederick F. Grap Jr., please visit our flower store.