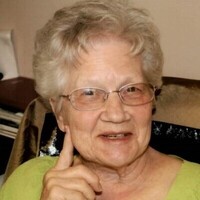 Fay E. Opelt passed on December 5, 2020. Fay was born January 27, 1927 in Granton, WI to Roland and Ora (Montgomery) Quicker. She attended Granton schools, graduating Valedictorian of the class of 1944 and then took a commercial course at University of Wisconsin – Whitewater. She worked in Milwaukee a couple of years and then came back to Neillsville working at the Milk Products, H.H. Quicker Accounting and Neillsville Shopper over the years.

She met Jerry Opelt and they had their first date on New Year’s Eve 1947 at the Silver Dome Ballroom in Neillsville. They were married October 16, 1948 at the United Methodist Church in Granton. They operated Skogmo store in Neillsville for 15 years starting in the 1960’s. In 1978, they converted their summer cabin at Hatfield into a year-round home being among the 1st to live there full-time. She loved living in the beauty and solitude of Lake Arbutus and it was a favorite gathering spot for family and friends for decades. After retiring, she and Jerry read meters for Jackson Electric throughout the Hatfield area from 1993-2007.

Fay liked reading, playing cards, and putting puzzles together. She was a member of the United Methodist Church of Neillsville and later Merrillan, United Methodist Women, Hatfield Homemakers, Hatfield Sportsman’s Club, three bridge clubs, and Red Hat Society. She and Jerry also bowled in a mixed couples league for over 30 years with Don and Rosie Kunze.

She was preceded in death by her husband of over 65 years, Jerry Opelt, her parents, Roland and Ora Quicker, a son, Lance and a brother, Ronald (Shig) Quicker.

Per her request, there will be a family graveside ceremony and a Celebration of her life at a later date.

The family would like to thank the wonderful staff at the Neillsville Retirement Community, where she resided for the past year and a half. Also, the staff of Ascension Home Care and the Black River Falls Hospice for their outstanding care of their mother.

Memorials, in Fay’s name, may be made to the HighGround Veterans Memorial Park and Museum, 7031 Ridge Rd, Neillsville, WI 54456.

To order memorial trees or send flowers to the family in memory of Fay Elinor Opelt, please visit our flower store.