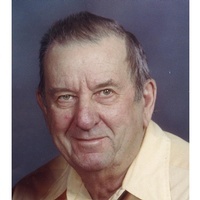 Elhart was born to Nels and Selma Mickelson on October 16, 1928 in Traverse, MN. He had seven brothers and three sisters.

He grew up in Stillwater, MN until drafted in 1950 to Kentucky/Tennessee. He served two years and was honorably discharged as a corporal in the United States Army. He was united in marriage to Joan Marie Johnson on June 19, 1954 and they lived in Milaca, MN. Elhart worked as a welder for Hoffman Engineers, which made equipment that traveled to the moon. Along with working construction his entire adult life, he also served as a police officer in Milaca, MN and later as a federal officer for the state of Minnesota before moving west to Colorado, Arizona and New Mexico in 1972. He loved the mountains and deserts and continued working construction. They lived in Buena Vista, CO until 1996, when they moved to Neillsville, WI. He worked at Figi’s and on the family hobby farm before retiring at the age of 84.

Elhart enjoyed being a servant of the Lord. As family patriarch he passed on his love of God to family and many others. He sang in men’s choirs and one of his cherished ministries was gifting bibles. Elhart was devoted to his daily Bible studies and he served as an usher in many churches.

The Gesche Funeral Home is assisting Elhart’s family with the funeral arrangements.

To order memorial trees or send flowers to the family in memory of Elhart Mickelson, please visit our flower store.