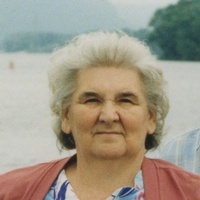 Eleanor was born March 30, 1934, in Tabor, South Dakota, to Harry and Margaret (Koupal) Kolda.   Her father died when she was 3-years-old. Eleanor and her mother moved in with her grandparents Joseph and Mary Koupal.  They resided there until her mother married Francis Shaw, who was also a widower. The two families joined and became a blended family of seven and eventually a family of eleven.

She attended school in Tabor, South Dakota. She met her future husband at a school play that she was in.  After graduation she worked as a nanny/housekeeper. She was united in marriage on August 20, 1951 to Adolph Mazourek. After Adolph was discharged from the Army, they started farming near Tabor.  In the spring of 1958 they moved to Clark County, where they had purchased a farm in Shortville.

Adolph and Eleanor raised their five children on their dairy farm.  While the kids were growing up, Eleanor helped out on the farm and ran the household. She also worked at the Neillsville nursing home as an aide.

She was an avid seamstress and quilter, enjoyed collecting fabric, watching birds, gardening, listening to polka music, spending time with family and friends. She often went back to South Dakota to visit many relatives and to see her childhood home, which had been the first school house in Tabor and is now a museum. She was a wonderful cook, loving mother, grandmother and great-grandmother.

She belonged to: Washburn Homemakers, TOPS club, St. Mary’s Catholic Church, and often helped on election days in the township of Washburn.

Sincere and heartfelt thanks are extended to the wonderful staff at Neillsville Care and Rehab and Ministry Hospice team. Eleanor's family will be forever indebted to them for all the loving care with which they blessed her.

To order memorial trees or send flowers to the family in memory of Eleanor Jane Mazourek, please visit our flower store.