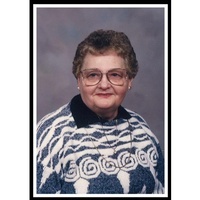 Edna Marie Lemons was born on April 4, 1922, on the family farm, just outside of Colwell, IA, the daughter of Guy and Pearl (Shave) Trask. She was united in marriage to Lawrence Lemons on May 14, 1938 in Osage, IA. They resided in Iowa until 1959 when they moved to a farm in the town of York. In 1969, they moved to their farm in the town of Grant. Edna worked as a farm wife and then as a part-time cook at the Granton School District which she started shortly before Lawrence’s death in 1972. Edna worked her way up at the school, starting as a part-time cook then going full time, later becoming assistant cook and finally as the head cook. In addition to cooking at school, Edna, also cooked the meals for the Granton Rotary Club and catered wedding dinners. She retired in 1996 at the age of 74.

Edna was a member of the United Church of Christ in Neillsville. In her spare time she enjoyed crafting, often making Christmas presents and pottery for her family.

In lieu of flowers please donate to a charity of your choice.

To order memorial trees or send flowers to the family in memory of Edna Marie Lemons, please visit our flower store.