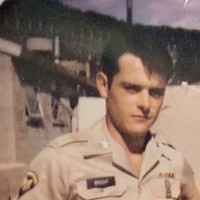 In honor of his wishes, no visitation or funeral services will be held; however; a private family celebration of his life will take place throughout the next few days.

Donald Alan Wright was born in Aurora, IL, to Donald Chester Wright of Norwood, IA and Evelyn May Myers of Chariton, IA, on a beautiful day, April 14, 1948.

Donald graduated from Fort Atkinson High School, WI, in 1966, and then began his career in the United States Army. He served in the Army from 1967 to 1972, where he spent a large amount of his time overseas in Korea. His time was spent on working as a heavy equipment mechanic and furthering his martial arts training where he obtained his 1st Dan Black Belt from Instructor Choi Wha Sung in Korea.

When he returned from Korea, he married Linda Faye Reynolds on February 9, 1976, at the Unitarian Church in Geneva, IL, and started a family. His drive to further his career took him on a path to Mid-State Technical College in Wisconsin Rapids, WI, where he became a diesel mechanic and later an EMT. He worked as a Maintenance Supervisor/EMT for Memorial Medical Center, Neillsville, WI, for 25 years and enjoyed retirement since April 2010.

He had a love for the outdoors, where he found great happiness spending time at his cabin, and preparing for the hunting season. A day well spent, included sitting on his front step at the cabin and taking in the quiet, while enjoying the natural beauty that the outdoors has to offer.

Donald Alan Wright is preceded in death by his parents Donald Chester Wright, Evelyn May (Myers) Wright, and his grandson Gage Alan Wright.

We will forever love and miss you.

To order memorial trees or send flowers to the family in memory of Donald Alan Wright, please visit our flower store.