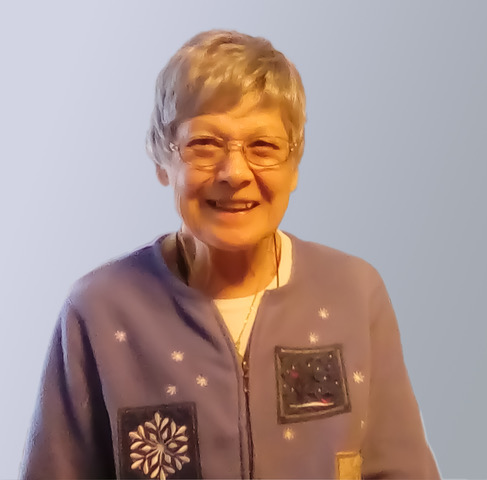 Dolores Grace (Schlaeger) Foster died peacefully on January 10, 2023, at the Neillsville Retirement Community in Neillsville, Wisconsin. She was born to Joseph and Jeanette (Ruﬀ) Schlaeger on March 25,1925. Her mother Jeanette passed away when Dolores was eight years old. Dolores attended a variety of schools in St. Paul, Minnesota, including St. Columba and St. Andrew's Catholic Elementary. She graduated from St. Joseph's Academy in St. Paul.

She studied art at Art Instruction in Minneapolis and Mills College of Advertising Art in St. Paul. She began her commercial art career at the St. Paul Letter Company and the Lows F. Dow Corporation. She also worked for the Osborne and Peterson Monument Company in St. Paul.

In 1949, she married John W. Foster of Neillsville, Wisconsin, on September 3. They lived in Forest Grove, Oregon, for three years where John attended Pacific University College of Optometry. In 1953 they moved to Thorp, Wisconsin, where John practiced optometry for 11 years.

Dolores was a charter member of the Philanthropic Education Organization (PEO) where she served as treasurer, guard, and corresponding secretary. For 10 years she volunteered at the Neillsville Memorial Hospital Gift Shop. She taught Confraternity of Christian Doctrine (CCD) at St. Mary's and was a Den Mother for Cub Scout packs.

She was a wonderful sister, wife, mother, grandmother, and great grandmother who enjoyed playing bridge with her friends, doing crossword puzzles, golf, cross country skiing, artistic painting, along with a passion for politics and bird watching. Her life was exemplified by her middle name, Grace, as she was loving and compassionate to her family, accepting and welcoming to all, and full of energy for the latest adventure. She was amazing!

A Mass of Christian Burial will be held on her birthdate, March 25, 2023 at 10:30 A.M. at St. Mary's Roman Catholic Church in Neillsville, WI. The Rev. Gregory Michaud will preside over the service which includes an interment at the Neillsville Cemetery following the Church service. A wake will be held at Gesche Funeral Home in Neillsville on March 24th from 5:00 to 7:00 p.m. with the Rosary to be prayed at 6:30 p.m. There will also be a wake one hour prior to the Mass at St. Mary's. Memorials may be made to the P.E.O.'s Wisconsin Cottey Scholarship Fund.

To order memorial trees or send flowers to the family in memory of Dolores Foster, please visit our flower store.