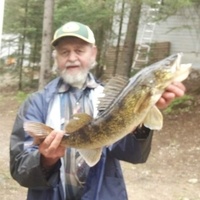 Dennis Louis Shadrick was born on September 6, 1945 in Medford, WI the son of Roy and Ruth (Jarchow) Shadrick. He served in the United States Army from 1963 to 1967 and then was united in marriage to Joan M. Faber in Goodrich, WI. After they were married, they moved to Granton, WI. Dennis worked for TDS in Neillsville, WI for 32 years before retiring.

He was preceded in death by his parents and a brother, Jack A. Shadrick.

Dennis had a love for the outdoors and considered their cabin in Minocqua as his second home. He welcomed his family to enjoy the serenity of nature in fishing, hunting and ATV rides. He made so many memories for his grandchildren.

A Celebration of Dennis’s life will be held on the afternoon of opening fishing day at the Granton Community Park.

In lieu of flowers, memorials may be directed to the family for designation at a later date.

To order memorial trees or send flowers to the family in memory of Dennis Louis Shadrick, please visit our flower store.