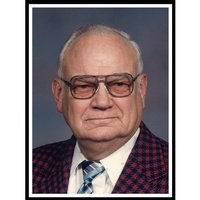 Clarence Schlinkert, age 96, of Neillsville, WI died Friday, January 19, 2018 at the Care and Rehab Center in Neillsville.   Clarence H Schlinkert was born on July 12, 1921 in Clark County, WI the son of William and Emma (Bieneck) Schlinkert. He attended St. John’s Lutheran School and graduated from Neillsville High School in 1941. He was employed at American Foods Condensery until it closed. He then worked in maintenance at Neillsville Memorial Medical Center. Clarence also had a hobby farm and helped local farmers with their crops. He was also the local handyman and repairman in the area, serving hundreds of people, whether it was painting or any other need they had. Clarence had a love for airplanes, whether building them or flying them. He also loved visiting and talking about the past. He was a wonderful man who would help anyone.   Clarence was a faithful life-time member of St. John’s Evangelical Lutheran Church. He served on the church council for many years and was instrumental in repairs and maintenance of both the church and school.   He is survived by his cousin, Adeline Arndt of Neillsville, WI, second cousin, Roy (Sandy) Bieneck of Neillsville, WI who has been his caretaker for many years. He is further survived by three nieces and numerous great nieces, nephews and second cousins.   He was preceded in death by his parents, a sister, Erna and two brothers, William and Elmer   Funeral Services for Clarence will be held at 11:00 a.m., Wednesday, January 24, 2018 at St. John’s Evangelical Lutheran Church. Pastor Timothy Biebert will officiate. Interment will be in the Neillsville City Cemetery. Visitation will be from 10:00 to 11:00 a.m., Wednesday at the church.   Pallbearers are: Ryan Bieneck, Luke Bergemann, Larry Kosmosky, Carl Nemitz, Dick Urban and Dennis Evanson.   Online Condolences may be made at www.geschefh.com.   The Gesche Funeral Home is assisting Clarence’s family with funeral arrangements.
To order memorial trees or send flowers to the family in memory of Clarence H. Schlinkert, please visit our flower store.