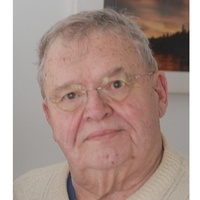 Carter Wegner, age 75, of Granton, WI died Friday, April 20, 2018 at the Marshfield Medical Center.   Carter Dix Wegner was born on April 23, 1942 in Milwaukee, WI the son of Lester E. and Irene J. (Dix) Wegner. He graduated from Brookfield High School and then attended the University of Wisconsin – Madison graduating with a degree in Microbiology. Carter then worked for the Schlitz Brewing Company in Milwaukee, the A&P Company in Manitowoc, WI and the State Department of Agriculture in Madison. On May 31, 1970 he was united in marriage to Coila “Jo” in Colorado. Carter then went back to school at UW – Madison and earned a second degree in Civil Engineering. He worked for several engineering firms  and the DNR in the Madison area.  Coila “Jo” died in 1991 and Carter then married Ann Rosen on March 27, 1993 in Middleton, WI. He followed Ann’s career north and retired to Granton in 2005.   Carter was a member of the Living Hope Evangelical Free Church in Neillsville. He was a member of Rotary International, a Scout Master for the Boy Scouts earning the Order of the Arrow and Eagle Scout awards. He volunteered extensively, over 1000 hours per year, for Habitat For Humanity. He was an amateur radio enthusiast (HAM Radio) and he enjoyed woodworking.   Carter is survived by his wife, Ann Wegner, a daughter, Julia Wegner of Minneapolis, MN, three brothers, Mike (Jolean) Wegner of Waukesha, WI, Bruce (Grace) Wegner of Anchorage, AK and Scott (Rose) Wegner of Waukesha, WI.   He was preceded in death by his wife, Coila “Jo” Wegner and his parents.   A celebration of Carter's life will be Sunday, May 6, at Living Hope Church, Neillsville. Lunch served at 12:30; memories shared at 1:30. Come dressed for a picnic if you like, as one of Carter's hobbies.   In lieu of flowers memorials may be directed to the Clark County Humane Society.   Online Condolences may be made at www.geschefh.com.   The Gesche Funeral Home is assisting Carter’s family with Funeral arrangements.
To order memorial trees or send flowers to the family in memory of Carter Dix Wegner, please visit our flower store.