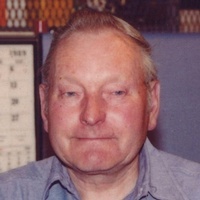 Calvin Chester Ives of Neillsville, WI passed away peacefully, after a courageous four year battle with cancer, at the Tomah VA Medical Center on January 3, 2019, with his family by his side.

Calvin was born April 11, 1930 at home in Fairchild, WI. He was the first born of four children of Elmer and Mina Ives. Calvin attended the Fairchild School District, after school he served in the US Army in Korea from 1951 – 1953 as a mechanic. In 1955, he went to work at Nelson Muffler Factory in Neillsville in the Maintenance Department. He was united in marriage in Price, WI on June 18, 1955 to Lorraine Ruth Engum. They moved west of Neillsville in 1963 after living in the city of Neillsville.

He had a love and knowledge of cars that grew into the establishment of Ives Auto Salvage as he continued his employment with Nelson Muffler, he worked long days and nights in his salvage yard also, helping people from near and far who needed parts. He was known to barter with those in need, have many lengthy car talk conversations with those who were impressed with his collection and the kindness he showed to help them, and his great memory of knowing where everything was….amongst his prized collections. His most prized possession, the “1947 Chrysler” honeymoon car. For Calvin and Lorraine’s 50th wedding anniversary they were taken in the Chrysler to the church they were married at in Price, WI. Calvin enjoyed going to flea markets, thrift sales, antiques stores and car shows throughout the state. He took his family tent camping, which later turned into the hard-shell truck bed camper in the 50’s and 60’s on various memorable trips out west, Glacier and Yellowstone National Park’s, the Badlands. He enjoyed spending time with his family and seeing each new addition throughout the years.

After 40 years with Nelson Muffler Factory he retired in 1995. In 2005, Ives Auto Salvage closed.

He was preceded in death by his parents, Elmer and Mina Ives.

In lieu of flowers memorials may be directed to: Give Kids the World Village, 210 S. Bass Road, Kissimmee, FL 34746.

To order memorial trees or send flowers to the family in memory of Calvin Chester Ives, please visit our flower store.