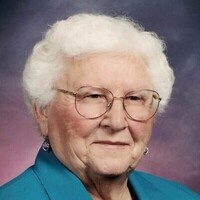 Bernice Mae Kalsow was born February 14, 1926 in the town of Weston, the daughter of Peter and Christina (Janecek) Boon. She received her education at Mound School and Neillsville High School and was confirmed at St John's Lutheran as a young lady. Bernice married Franklin Zickert, and they farmed for 43 years before Franklin passed away suddenly in 1986. They sold the farm in 1989, and Bernice moved to town, but continued to work at the hospital. She worked for Memorial Medical Center for 27 years.

She was united in marriage to Donald Kalsow in 1990 and retired from the hospital in 1991. They both enjoyed camping and traveling and spent winters in Apache Junction, AZ. They have many friends there as well as in other states.

She was a member of St John's Evangelical Church, the American Legion auxiliary, the Lutheran Ladies Aid, the Good Sam's Camping Club, and president of the Senior Center. Bernice enjoyed playing cards and visiting with friends and family.

Funeral Services for Bernice will be held at 11:00 a.m., Friday, July 17, 2020 at St. John’s Evangelical Lutheran Church in Neillsville. Pastor Nathan Wilke will officiate. Interment will be in the Neillsville City Cemetery. Visitation will be from 9:30 to 11:00 a.m. Friday at St. John’s,.

Bernice will be sadly missed by her children and friends.

To order memorial trees or send flowers to the family in memory of Bernice Mae Kalsow, please visit our flower store.