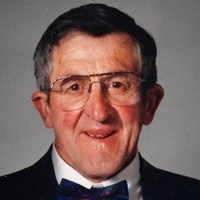 At age 15 he bought his brother’s milk route and began delivering canned milk. This was the start of a long career in the dairy industry. He operated the milk route for three years. On May 22, 1946 he was united in marriage to the love of his life, Hanna Marie Hediger. Bernie and Hanna farmed together at two locations until 1966. After the sale of the farm, they bought a home delivery milk route with Bernie delivering and Hanna serving as the bookkeeper. He continued with Dolly Madison/Kemps until his retirement in 1990.

Bernie made many friends on the milk route and many still remember his sharing of a chocolate milk or an ice cream bar. Finding he missed people when he was retired, he worked for a few years at the Willie Wonder Car Wash.

He was a lover of people and enjoyed being out in the public and with friends. He was a member of several bowling teams, golf groups, and was very proud of his many years of service with the Neillsville Lions Club. He loved the outdoors, farming, gardening, snowmobiling and dancing.

Bernie and Hanna also spent many hours together and you would never see one doing something without the other whether cooking, gardening, preserving their food or any other work. They were beautiful dancers and it was a delight to watch them together; their dance rule really defined their life … You dance the first and last dance together and in between those dances you enjoy yourselves and your friends.

Throughout his life, Bernie was an active member at the Neillsville United Church of Christ. In the last years of his life, he made many new friends at the First UCC in Green Bay, Nicolet Highlands Senior Living and most recently Renaissance Assisted Living Center.

Visitation will take place at Gesche Funeral Home, 4 S Grand Ave, Neillsville beginning at noon on Saturday, June 13, 2020. A Prayer Service will begin at 2:00 p.m. with Pastor Robert Laubenstein officiating. Interment will be in the Town of Weston Cemetery.

Memorial donations may be made to the First United Church of Christ Planned Giving Endowment in Green Bay or the Neillsville Lions Club.

The funeral for Bernie will be live-streamed starting at 1:30 p.m..  Please follow the link below this obituary.

To order memorial trees or send flowers to the family in memory of Bernard "Bernie" Lee Opelt, please visit our flower store.