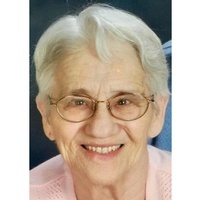 Arleen Chaltry (Miller), age 85, of Black River Falls (formerly Neillsville), WI died May 11, 2018 with her family at her side.

Arleen Faye Chaltry (“Ducky”) was born on October 14, 1932 in Peshtigo, WI, the daughter of Harvey and Doris Miller. She graduated from Peshtigo High School and on November 11, 1950 she was united in marriage to Leonard C. Chaltry Sr. They were married for 60 years until Leonard’s death in 2010.

Arleen will be best remembered for her sense of humor and always putting other’s needs above her own. She loved spending time in the kitchen teaching her children and grandchildren to cook. She enjoyed traveling the world, fishing, camping, dancing, and playing cards. Later in life she enjoyed solving puzzles and enjoying time with all her guests.

Mom, grandma, great grandma will be dearly missed and loving memories of her will be treasured by all who knew her. Rest in peace, free from pain and worry!

A Celebration of Life for Arleen will be held on Friday, May 18, 2018 at the Gesche Funeral Home in Neillsville preceded by visitation time from 9:30 to 11:00 a.m.

To order memorial trees or send flowers to the family in memory of Arleen Faye Chaltry, please visit our flower store.