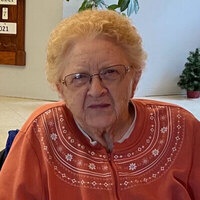 A livestream of Angie's memorial service can be seen in box below this obituary beginning at 11:00 a.m., on Saturday, May 8, 2022.

Angela (Angie) was born April 17, 1932 in Granton, WI to Tony and Mary (Marek) Vobora.  She graduated from high school in 1950.  Following high school she ventured to Scottsdale, AZ where she worked as a waitress.   She would proudly tell stories of many dignitaries and entertainers that she served.  Angie met her first husband, Harold (Lefty) Walker while living in Arizona.  They were married in 1954 and had 2 daughters.  During Lefty’s military career in the Navy they made their homes in Illinois, Hawaii, Maryland and Florida before returning to Wisconsin after his retirement.  They owned and operated Walker’s Liquor Store in Neillsville for 7 years.  They later divorced.  After the sale of the liquor store, and until her retirement, Angie worked for over 24 years as an abstractor for the law office of Johnson, Sautebin and Inderberg.

Angie married Leland Garbisch in 1977.  They remained married until his death.  She and Lee enjoyed dancing, camping and traveling.  Angie also enjoyed knitting, crocheting, flower gardens, playing her accordion, and crossword puzzles.  She spoke of her most memorable trip to the Czech Republic where she met new found relatives.

A memorial service for Angela is planned in the spring.

To order memorial trees or send flowers to the family in memory of Angela M Garbisch, please visit our flower store.