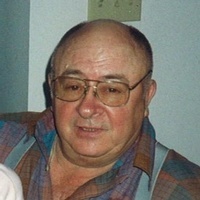 Alvin “Happy” Ehlers was born on October 28, 1926 in Greenwood, WI the son of Alvin and Mary (Morgal) Ehlers. He attended Eaton Center Grade School and Greenwood High School. He was in the livestock and trucking business along with Frank Thomas for several years. After Frank sold the business, Hap went to work for the Chevy garage in Greenwood as a car salesman. When the garage burned down, he went to work for Gross Motors in Neillsville. He was a salesman there for 30+ years.

Hap belonged to several clubs. Past member of the Neillsville Men’s Club, Corner Club ATVers, the Hatfield Sportsman’s Club and several snowmobile clubs, along with membership in the Legion of Leaders for 25 years of achievement selling cars and trucks.

Hunting and fishing were his main hobbies along with 4-wheeling.

At Christmas time he played Santa to sick and elderly shut-ins. He went as far as Bloomer and Pittsville calling on as many as 72 people in one year. He was Santa for 27 years.

After his retirement, he spent a lot of time at his cottage on Marsh Miller Lake in Bloomer, WI.

He is survived by a brother, William (Linda) Ehlers of Greenwood, WI and several nieces and nephews.

He was preceded in death by his parents a sister, Amy Olson and a brother-in-law, Stanley Olson.

To order memorial trees or send flowers to the family in memory of Alvin "Happy" Ehlers, please visit our flower store.