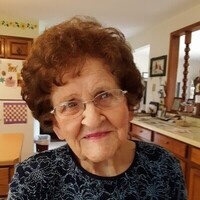 On Wednesday, November 18, 2020, Adeline (Bieneck) Arndt passed away at the Memorial Care and Rehab Center in Neillsville, Wisconsin at the age of 100.

Adeline was born on July 9, 1920, in the town of Lynn, Wisconsin. She married Ernest (Paul) Bieneck in 1937.  They farmed for over 40 years in Neillsville, raising their family of seven children.  During this time Adeline tended to a massive garden, canning 600 or more quarts of vegetables every summer and making countless bouquets of gladiolas for church and special occasions.  She was a wonderful cook who made everything from scratch.  Relatives often marveled that the only thing on the table not from the farm was the salt and pepper!  And no one could get enough of her famous pies!  After 56 years of love and marriage, Paul died in 1993.

Adeline remarried Herb Arndt in 1995.  They spent 10 years dancing and traveling before he passed in 2005. But love was not over for Adeline and although they never married, her very dear friend Al Macha made her 90s an adventure.  They spent every weekend dancing, playing cards, trying their luck at the casino and traveling though the United States.  Al died tragically in a house fire in 2017.

Adeline had an active life.  She was a lifelong and active member of St. John’s Evangelical Lutheran church.  In her retirement she made hundreds of quilts and continued to sew right up to her death.  She loved fishing and playing cards, and let her competitive nature show with both!  The thing people probably loved the most about Adeline was her great sense of humor and memory for thousands of jokes.  She had a quick wit and always ready with a joke, even in her final days for her doctors and the minister.  She will be deeply missed.

The family would like to thank the staff at Sunset Gardens assisted living for the great care they took of Adeline for the last two years, and to the staff at Memorial Hospital and Rehab Center for their care and support during her final days.

Due to Covid-19 a private service will be held for immediate family members.

To order memorial trees or send flowers to the family in memory of Adeline L. (Bieneck) Arndt, please visit our flower store.